KuCoin lending review: Is it really possible to earn passive income on your coins? What are the risks?

In this bullish season in crypto, many people are making life changing profits. However, it is important to seek ways to continue making profits, because as those who have been in crypto a bit longer know, these times come in waves and the fluctuations can be crazy.

Moving your money back to fiat currencies can be a really disappointing option because current interest rates are so low. For this reason, many investors, myself included, started to search for alternative solutions. The goal is to at least keep making some interest on our dollar holdings.

There are many services that now offer interest to users in exchange for staking or lending out their stable coins to them. After comparing several of them, I decided to try out KuCoin. This one specifically caught my attention because of the high interest rate they offer. In this article, I will share my experience using KuCoin lending and asses the potential risk. So, let's get started:

KuCoin is a trading exchange based in Singapore. The cryptocurrency exchange officially launched on September 15, 2017 after its initial founding in 2013 by Michael Gan, Eric Don, Top Lan, Kent Li, John Lee, Jack Zhu, and Linda Lin.

What is Kucoin Lending?

KuCoin offers an opportunity to lend your unused assets to other users who are seeking loans for margin trading. For example, let's say a margin trader predicts the BTC price will go up. He borrows your USDT to buy BTC, and when the price goes up he sells BTC for USDT and pays back the borrowed USDT with interest. To guarantee the loan, the trader needs to maintain a certain amount of assets as collateral so that he can pay back the USDT if his prediction is wrong and BTC goes down.

Let's take a closer look at KuCoin lending and assess the risks.

A first look at the high interest rates on KuCoin lending

The first thing that really stood out to me is the high interest rates on USDT. As you can see in the picture below, the average interest rate on USDT around 50% per year.

Other coins have a significantly lower interest rate. It seem like there is a lot more demand for USDT lending and that's the reason the interest rates are so high.

Assessing the risk of KuCoin lending

When lending your money on a platform like KuCoin, you still want to sleep at night. We are going to look at the different risks that come with lending stable coins so that you can make a relatively safe decision.

The risks in holding stable coins

There are multiple stable coins and each has a different organization behind it.

A look at USDT

USDT, also know as Tether, is the most popular stable coin but also had some controversies. Previously, they claimed on their website that for every one USDT they had one dollar to back it. When they were unable to meet all withdrawal requests in 2017, it became clear that this was not accurate. Part of their money was put into other investments and loans and they had to change the website to state "100% backed by our reserves".

This led to a general feeling of lost confidence and doubt around Tether due to the lack of openness and the failure to provide regular audits of the reserves backing USDT.

We could say then that potential risk in holding USDT is that it could turn out that USDT does not really have the backing and people lose trust in the USDT coin.

The demand for USDT in KuCoin is consistently the highest, resulting in interest rates of up to 60% a year. While this is definitely sounds attractive, with the uncertainty around the coin you might be safer putting your assets in another stable coin, such as USDC.

A look at USDC

USDC coin is the stable coin advertised by Coinbase. Their website states "Each USDC is backed by one US dollar, which is held in a bank account.". Their assets are managed by the well-known accounting and consultancy firm Grant Thornton LLP. They publish a PDF with the full audit on their website every month.

The transparency around USDC gives me a greater assurance that my assets are safe.

The demand for USDC on KuCoin is lower than USDT, which results in the interest rates being lower. The average interest rate on the day of writing this article is around 25% per year, compared to 50% annual interest on USDT.

The risk of a KuCoin hack

We all know that cryptocurrency exchanges are always a target for hackers. Many stories in the past remind us we can't be naive about these centralized exchanges.

KuCoin has not come out untouched from these hacking attempts. On September 25, 2020 hackers stole $275 Million worth of assets. This caused a big hit in their popularity, but the CEO's reaction boosted my confidence as did the fact that 100% of the assets are covered by their insurance funds.

Still, the risk of hacking cannot be overlooked - a big enough hack can bring an exchange down entirely. One of the examples is the Japanese exchange Mt. Gox. They declared bankruptcy in 2014 after repeated hacking attacks that had begun in 2011.

Of all the interest earned on KuCoin, 10% will go to an insurance fund and 5% is taken as a trading fee. If the collateral of the borrower loses its value, the loss will be cover by the insurance fund. While this minimizes risk in normal circumstances, we can't predict what would happened in a crash like in 2017 where a lot of Altcoins lost 70% off their value within a couple of days.

In a crash like that is possible that the borrowers' collateral would suddenly lose worth and the loss would be too great for their insurance fund to cover. In that case it is unavoidable that you would probably lose your money.

While doing this research I lent $2500 on the platform. I found the platform easy to use and you can choose how long you want to lend your assets. The options are seven, 14 or 28 days.

One thing that I soon noticed is that regardless of the loan length you specify, a borrower can repay the loan at any moment. In some cases, I set the term to 28 days but the money was already payed back in an hour.

This can be a bit annoying because ideally you want your money to be lent out for the full loan period so you don't need to track it all the time.

There is an option called auto-lend, this option lets you auto-lend your assets but you have to fill in a daily interest rate. It is important to note that the market interest rates can fluctuate greatly during the day. This can affect your chance of fulfillment - if you put your rate on an annual rate of 50% but the market becomes a bit weaker then your lending order might not be fulfilled until the market is back up. 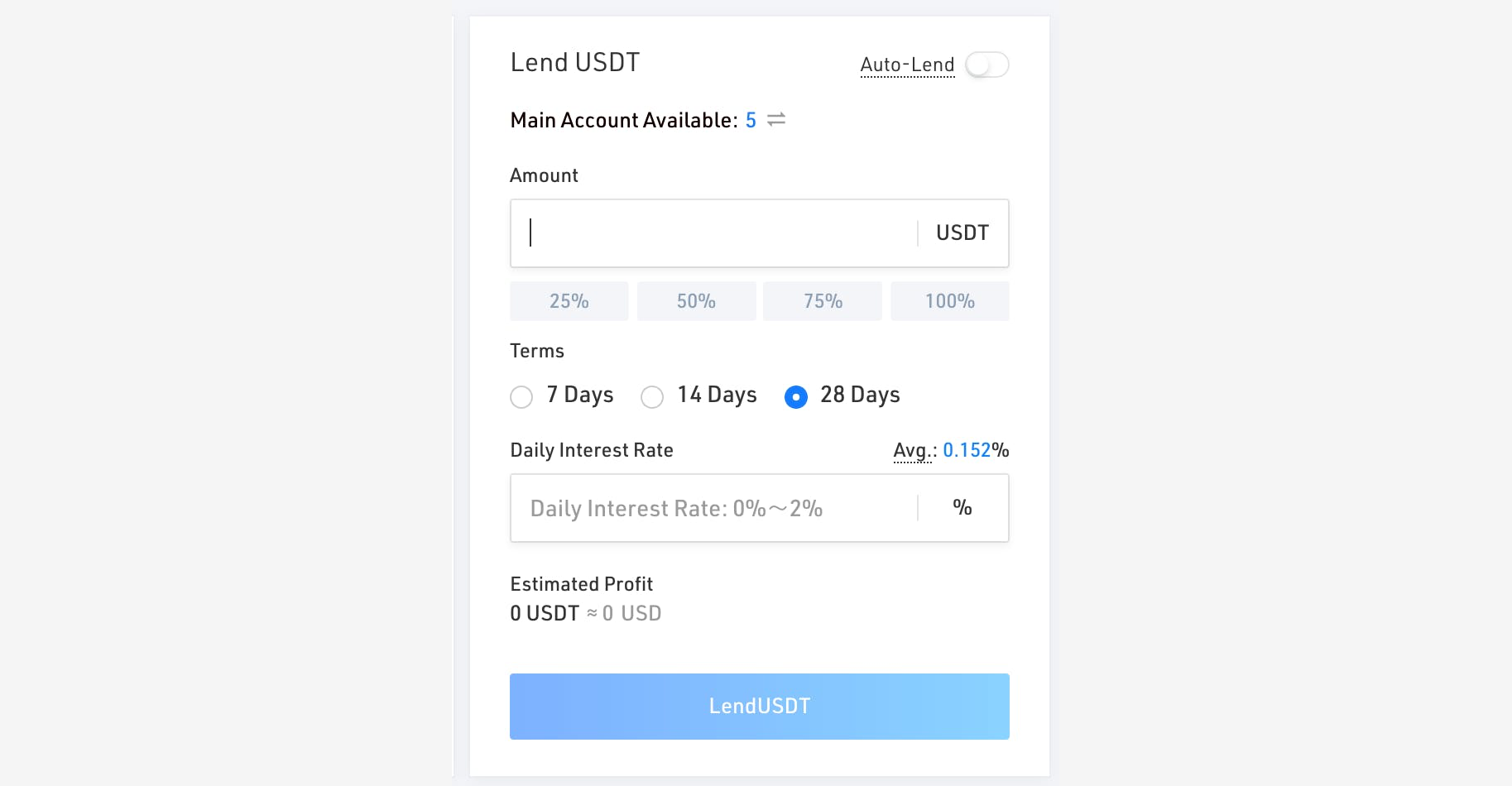 We hope this article gave you a better insight into the potential risks and rewards of using a platform like KuCoin. I am quite impressed with the returns that it gives, but also aware that with centralized services like this there is always a security risk that we have to take into consideration. But as I always say, without risk, no reward.

I will continue to research and review other services to earn interest, including options that are completely decentralized. If you would like to receive updates, please make an account on whitepaper.io and subscribe to our newsletter where I will keep giving honest reviews on services like KuCoin.